Day 119: Country #13.2 I was surprised by the lack of universities around the city center and I wanted to explore Greater Hanoi, so I referenced a bus route map […]

Day 118: Country #13.2 Whereas the touristy and traditional history of Vietnam is located on the East of the city around Ho Hoan Kiem lake, the modern developments are mostly […]

Day 116: Country #13.2 I was happy that I saving over 40 hours of uncomfortable bus travel according to forum posts detailing the horrors of the Vientiane-Hanoi bus route. Like […]

Day 115: Country #14 I debated making a third attempt to visit Kaysone Museum, but instead got detoured by some fruit vendors from the Morning Market outside Talat Sao Mall, […] 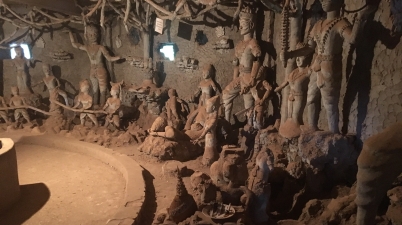 Day 114: Country #14 Vientiane is unusually located in that it is the capital of a country, but the city border is shared with another country, Thailand. I could easily […]

Vietnam to Laos by land

Day 112: Country #14 Aware that it would be an extremely long bus ride with plenty of opportunity to sleep, I woke early and trekked to the Ben Xe bus […]

Phong Nha is a small town in Central Vietnam at the edge of an extensive network of caves, karst mountain formations, forests and agriculture. It’s caves draw tourists, but the […]

The hostel owner was very nice and helped me print out an eVisa, but I ended up talking to her for a while before finally making my way to the […]

Hoi An and Danang, Vietnam

We arrived in the early morning to the Queen bus station in Hoi An, but it was closed, which was unexpected. I walked around looking for a place to store […]

Nha Trang is a coastal resort city conveniently located 1/4 of the way between Ho Chi Minh City and Hanoi. With such a long coastline, I wanted to visit a […]

I checked out early and loaded my bag onto the minivan for a combination Cu chi tunnels and Mekong Delta tour. I paid a little extra in order to do […]

Ho Chi Minh was the leader who brought Communism to Vietnam. After annexing South Vietnam, he unified the country, and Saigon, the previous capital of South Vietnam was renamed in […]