What’s interesting though is the extreme inconsistency of the references throughout the city. Many shops and hotels reference “Saigon” to romanticize nostalgic or touristic senses, but many others recognize HCMC. Even the people are somewhat torn between the uses, but acknowledge both references, at least in front of foreigners who are not aware of or maybe don’t care about the distinction. I did come to learn about some minor biases such as in newspaper reporting where negative stories talk about “Saigon” and positive ones about HCMC.

I decided to visit the commercial District 5, far enough away from District 1, the city, political and tourist center, to get a sense for if any of the rhetoric impacting daily life. Aside from a few streets adorn with red communist flags, it felt like a pretty normal city. I visited a market to look for a replacement chain, which I use to lock my bag against bed frames (Indonesian immigration declared my chain a weapon). Then I made the long trek back toward District 1, absorbing daily life along the way, but it took much longer than expected.

Once back in the city center, I headed to the Saigon Opera House and watched a dramatic dance production of The Mist, a story about village life, the rice season, and relationships by Vietnam’s top dance troupe. It stuck me how unevenly distributed global performance talent is located. 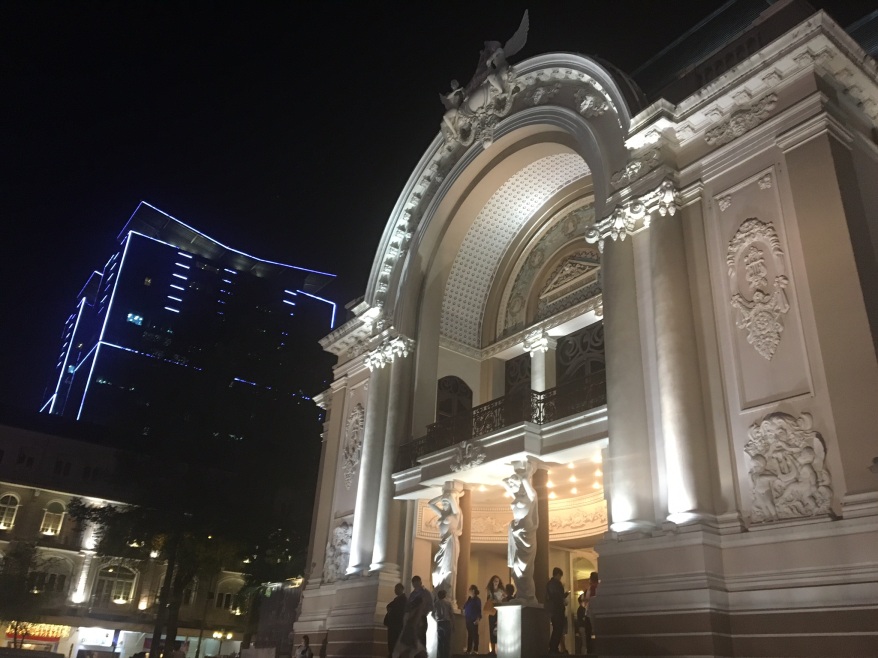 After the show, I crossed the street to a tour operator to coordinate some plans, then grabbed a Banh Mi sandwich and headed back to get ready for an early morning.

Tip:
I recommend using official government names when referencing locations and cities because you don’t know who you might be talking to or potentially offending if you reference something politically sensitive.