The hotel staff were super nice and offered sight seeing suggestions as I waited for the complementary breakfast to be prepared at the attached restaurant. Aside from being the only practical accommodation option, it was actually a great value for only $18.

It was still pretty hot outside so I pulled out a piece of gear which I had yet to use all trip, a shirt lined with water absorbing gel which soaks up cold water overnight and slowly releases it through evaporation to keep the body cool.

I decided to head south to visit the museums first, but it started raining before I could get inside the National Museum. I switched to sandals but my walking shoes had already gotten soaked.

As I walked through the museum’s exhibits on prehistory, I noticed some inconsistencies with my western education, but we weren’t allowed to take pictures. Curators were positioned in the first levels, but later into the extensive count of exhibitions, there were fewer. I did however feel compelled to take pictures of a newspaper headline printed on a wall.

Apparently, on the momentous day when Bangladesh gained independence from Pakistan (a very similar storyline of events and motivations to what I heard earlier in Papua New Guinea, Timor Leste, and Miri, Malaysia), the Washington Post also reported that Japan attempted to apologize to China for WW2. This caught my attention because my friend in China had mentioned how the Chinese resent that Japan never apologized for WW2. Similarly, the adjacent story about China-India border conflicts have been repeating themselves in Bhutan (my next country).

I really light up when discovering nuggets of truths accidentally hidden in museums, which contradict present day political rhetoric.

The monsoon rains had stopped by the time I finished the contemporary and modern Bangladesh exhibits, so I continued south, through Ramna Park then stopped by the International Mother Language Museum. They were surprised to see a tourist, but called an English speaking staff member to walked me through the displays. It was more a catalog of ethnic languages across different countries than about the Language Movement, which was the argument used to justify Bangladeshi independence.

I passed through a small botanical garden then wandered into a government employee hospital which looked empty, but someone came out and kindly helped apply a bandage on my toe which was starting to blister from the rain and abrasion against the sandals. 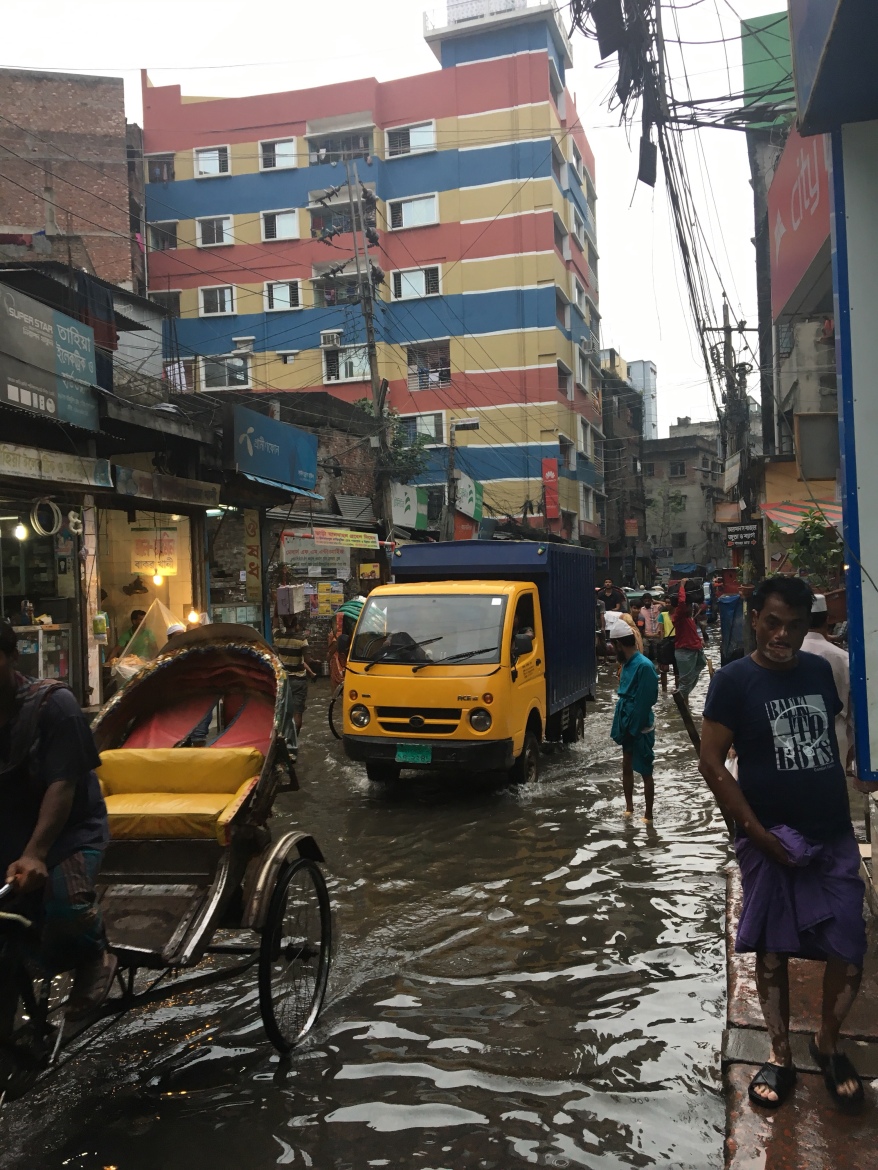 Finally, I reached Old Dacca, a very dense concentration of structures where a lot of people lived and worked. I ran into a few flooded areas, which made navigation even more difficult, as I had to take small alleys to bypass them. A little scary, but also fun. Everyone else carried on like it was completely normal.

I saw the government quarter, Chalk Bazar Shahi Mosque, Lalbagh Fort, and a few other religious buildings, but with all the detours from flooded and nonlinear streets and slower pace from blisters, it began to get dark and I soon realized I might not be able to get out of the district before nightfall. After nearly 6 months of travel over 17 countries, I got a little worried, but my military training kicked in and I kept walking north as best I could.

Eventually, I found a main Street and could just follow the straight roads back. It was still a long walk, but predictable.

Average walking speed is 3 mph (5 km per hour). This is factored into map apps like maps.me, but it’s still a good rule of thumb to know. This is about 20 minutes for 1 mile or 10 minutes per km. Jogging doubles your speed. I use these reference calculations to help me estimate how much time I need in a day and how far out I can explore safely if I don’t have taxi or bus options available.