I really enjoyed eating breakfast on the rooftop, talking to the wonderful family hosting me and getting to know them and various other family and travel guests that passed through. I watched the wife cook as we chatted about gardening. She was surprised when I claimed that plants don’t need soil to grow, but it’s true! I suggested that she could hydroponically grow tomatoes on her rooftop kitchen and pluck them fresh from the vine for each meal.

After breakfast, the husband drove me to the airport on his motorcycle and assured me that he would complete the travel arrangements for Bhutan by the time I finished visiting Bangladesh.

Upon landing in Dhaka, I was surprised, but happy, to see that my phone plan covered Bangladesh as it would make exploring much easier. I withdrew money, exchanged for some smaller bills, then learned that I needed to walk outside the airport to catch the bus to the city. English was not common, but many locations had English names, so I was able to pronounce a few key words. Overall, I mainly confirmed that the bus would stay on New Airport Road, the main route south. 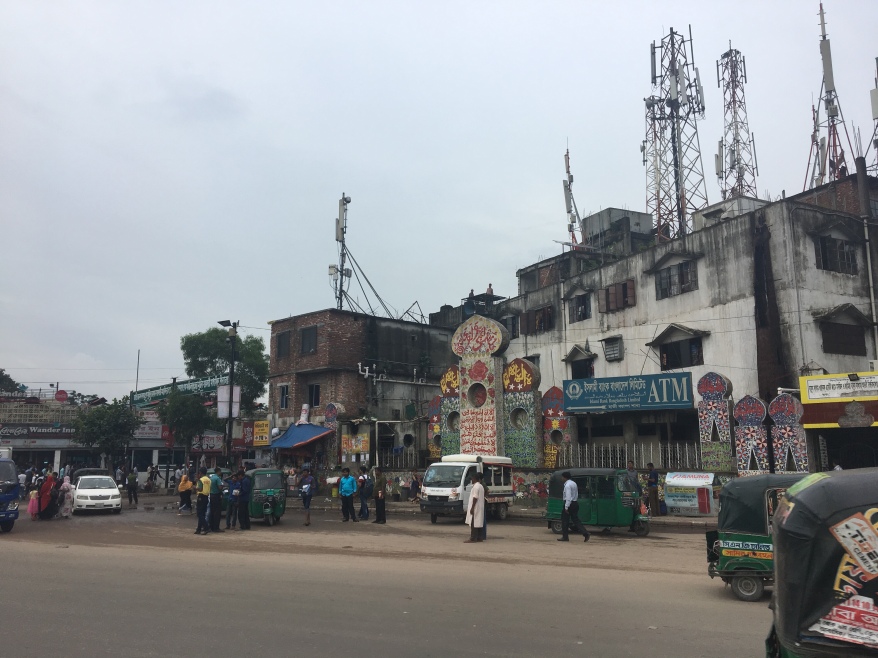 Because of my large travel backpack, the driver put me in front, which was great as I was able to see everything in front of me. One of the first things that caught my attention was a green train, which zoomed by on the railroad tracks parallel the road. My jaw dropped as I saw young men dancing on top of it having what seemed like a really fun and dangerous time. I was in disbelief, but luckily I snapped a picture before the train flew out of sight.

Bangladesh quickly met my expectations for being an incredibly densely packed country. We were soon stuck in traffic, but I enjoyed watching how the large buses muscle into small spaces and how people vie for a few extra inches ahead of their neighbors. It gives you a sense for how people think about the world. Especially interesting was the adoption of large bumpers that almost looked like offensive rams.

I arrived at FarmGate bus stop and was overwhelmed by the masses of people; definitely more dense than China. My hotel was in the middle of a large market which made it a bit difficult to locate, but they were delighted to see an American.

Carrying a nearly 40 lb (18kg) backpack in the Bangladesh summer after enjoying Nepal’s cool Himalayan climate, was brutally unbearable. I showered then went back out to the FarmGate market to look for food, but unsure about the mosquito situation, I kept jeans and long sleeves on.

I found a lot of different samosas at a pretty good price, then headed back to the hotel to enjoy the air conditioning and figure out a game plan for exploring Bangladesh, which I wasn’t able to do given the sudden changes I had to make to my plans.

When carrying a lot of weight, the best way to balance and distribute the load is with your hips. That’s why most travel packs have hip belts. Using the hip belt will alleviate up to 90% of the weight stresses from your shoulders. I also think it’s a safety measure because people can’t yank it off you and throw it in the back of a speeding truck as easily.