Male (pronounced Mal-Lei) is the capital and largest island of the Maldives archipelago, a string of over 1000 islands. I first learned of this tiny island nation when their president held an underwater cabinet meeting in full scuba gear. I wasn’t sure if this would be my only chance to visit before it gets swallowed up by the rising oceans.

Without much farmland, food needs to be imported and prices reflected accordingly, but I decided to search for a more affordable option at a grocer while exploring a little of the immediate neighborhood in Hulmumale, an stretch of land extending from Male, where I stayed. I was in luck and found some local snacks. 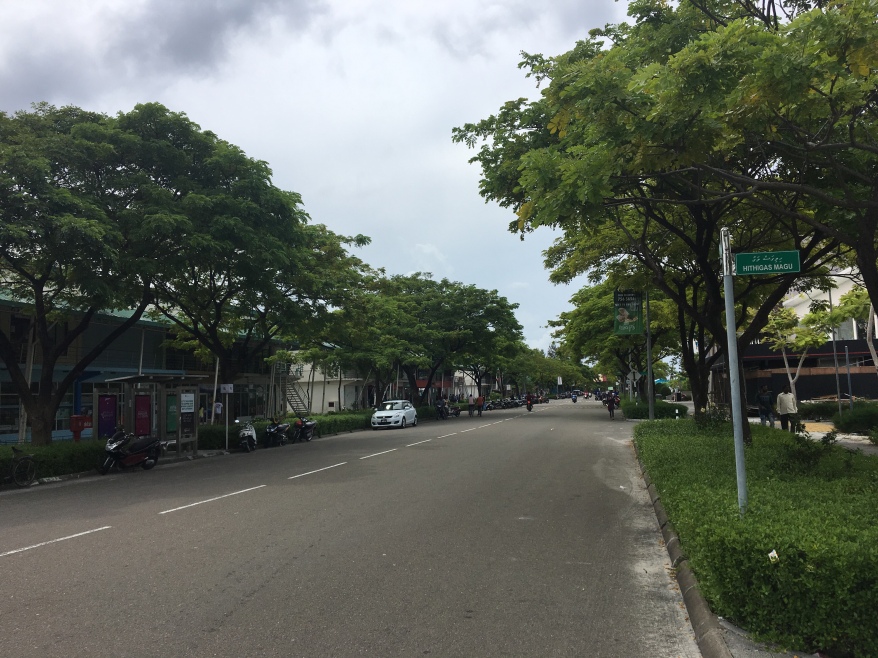 The hotel manager arranged for his friend to give me a walking tour of Male, so when I got back to the hotel, he took me to the ferry and bought me a ticket to the main island where I waited for his friend. I enjoyed watching the city rise from the ocean bit by bit. Since I arrived so late at night, I didn’t realize how tall and compact the buildings were to one another, as if clinging onto one another for dear life on a small buoyed patch of land. 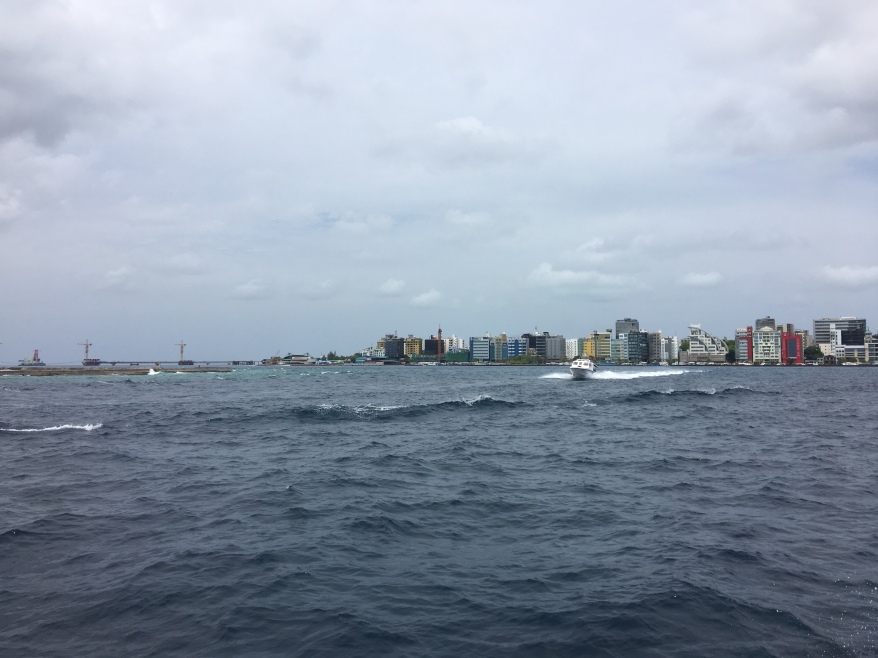 We started with an introduction to government and Muslim history and culture in the Maldives. From the ferry station we saw the presidents office, Male Friday Mosque, the fancy new police station, Muhammad Thakurufaanu Al Auzum mosque, and the fish market. 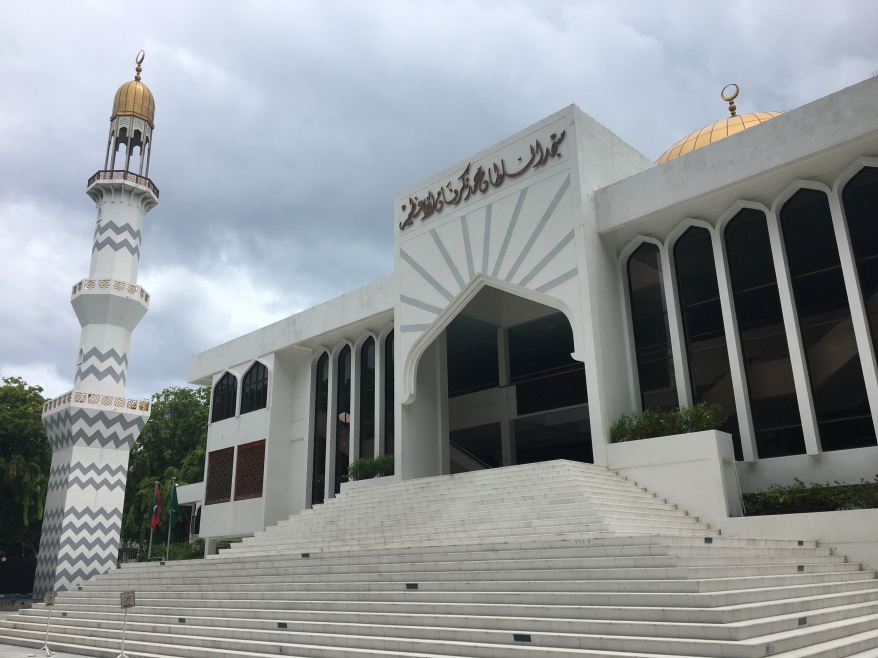 Then he wanted me to get lunch and take me to the Maldivian National Museum afterwards, but I wasn’t inclined on wasting time at an overpriced restaurant where he was likely being reimbursed a commission for bringing me in, so I asked to go to the museum first.

The assortment of artifacts, textiles and history was interesting, but I found the police museum extension to be even more intriguing because I was able to talk to one of the police staff overseeing the exhibits. We exchanged curiosities about the world and the Maldives. 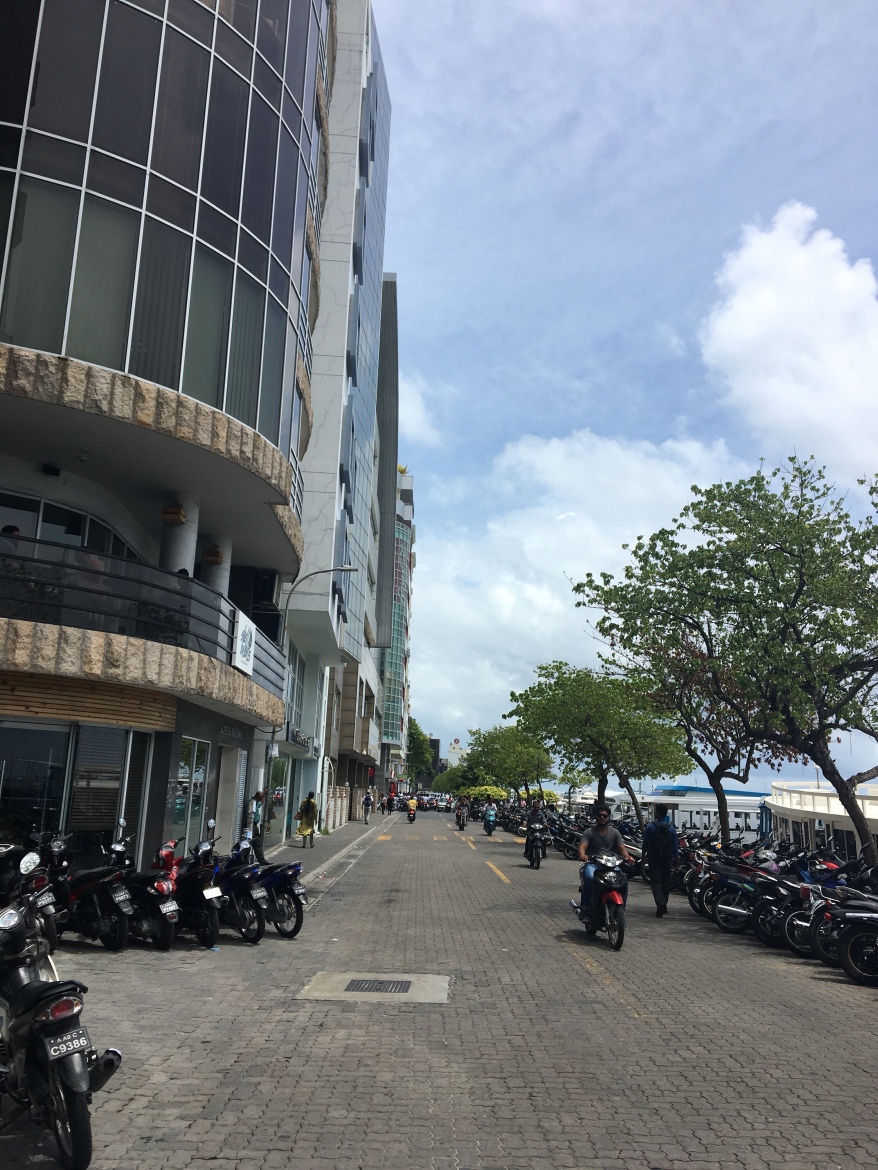 With new insights beyond anything that could be learned in a museum, I snuck out to avoid my guide and continued to explore on my own. I went back to the fish market to get food and a coconut, then walked all the way across to the south of the island, weaving through narrow streets and watching everyday life. 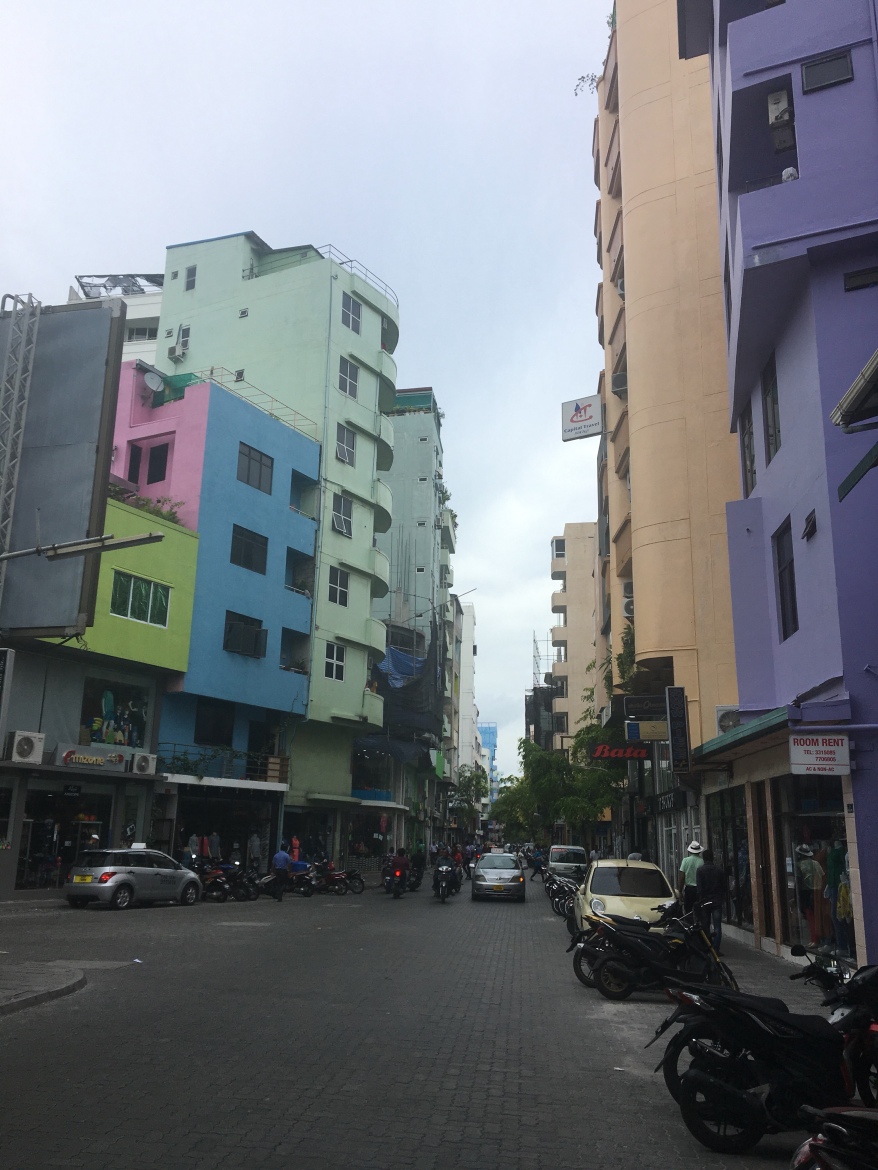 The universities located at the southern perimeter were quite small so I headed to the west edge of the island to catch a ferry to the neighboring Villingili island even though the hotel manager advised me to not go there. It was absolutely worth the excursion. 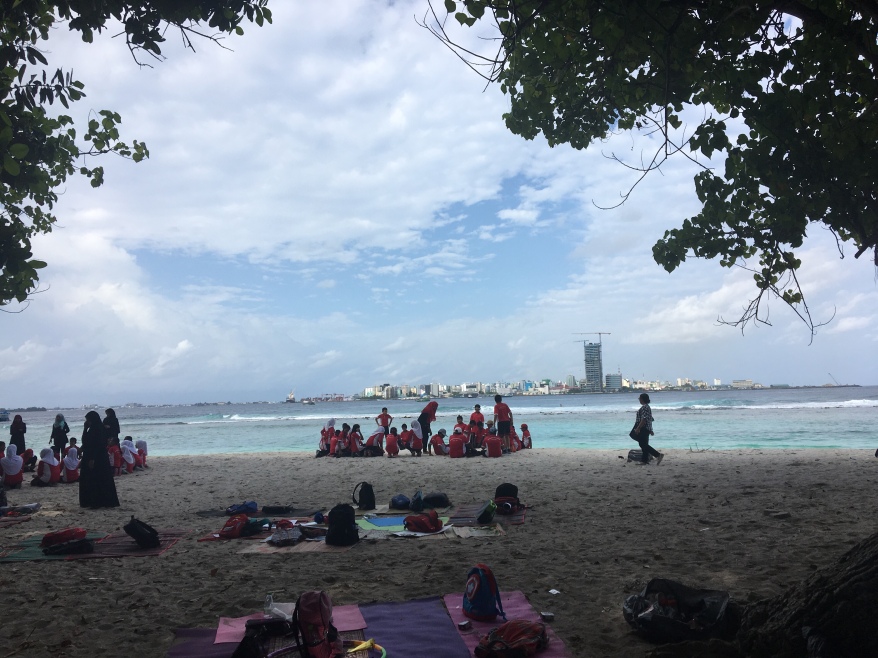 Villingili was incredibly peaceful, full of parks on the interior, beach on the edge and local community throughout. I saw a school, men fishing, small shops, and plenty of uniquely designed fishnet style chairs where I could lounge by the oceanside. While parents went to work in Male, the children had the island to themselves to explore, rule and enjoy field trips to the beach.

The island was quite small and I soon saw more than half of it, so I headed back and attempted to accomplish the same feat by walking through the other half of Male. 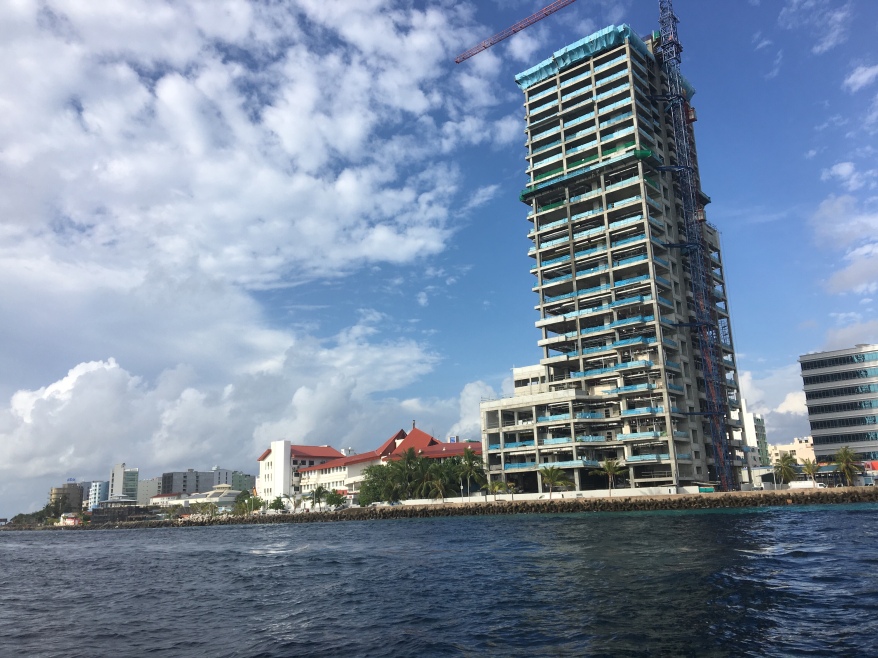 As evening approached I saw crowds of people gathering around the beach, swimming and playing in artificial semi enclosed pools, but essentially in the middle of the Indian Ocean. In the distance was a train of heavy machinery constructing a bridge to connect the islands, operated my a Chinese construction company, evident by long stretches of fencing advertising numerous other projects from places like Cambodia’s new port city, which I encountered in Phnom Phen. 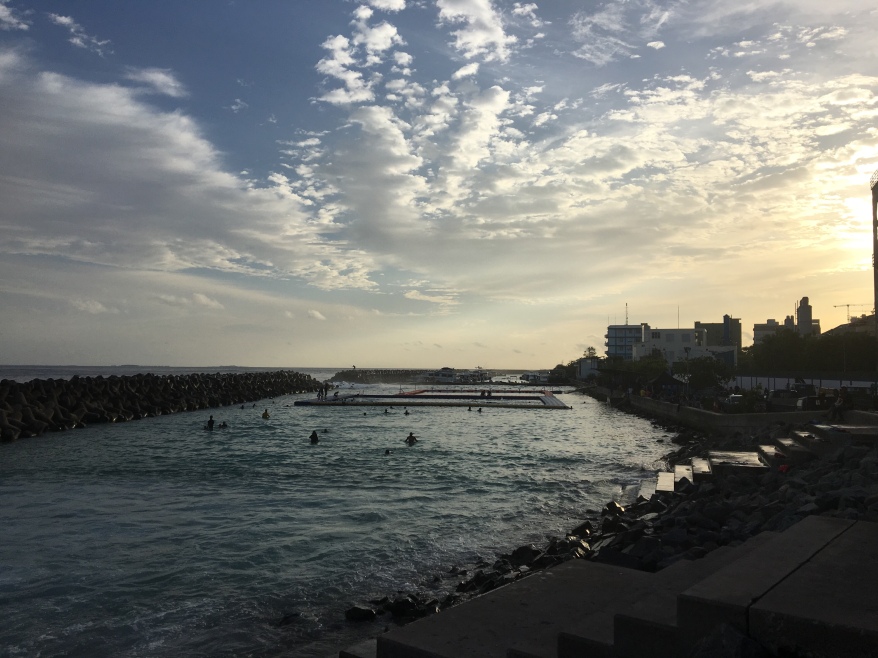 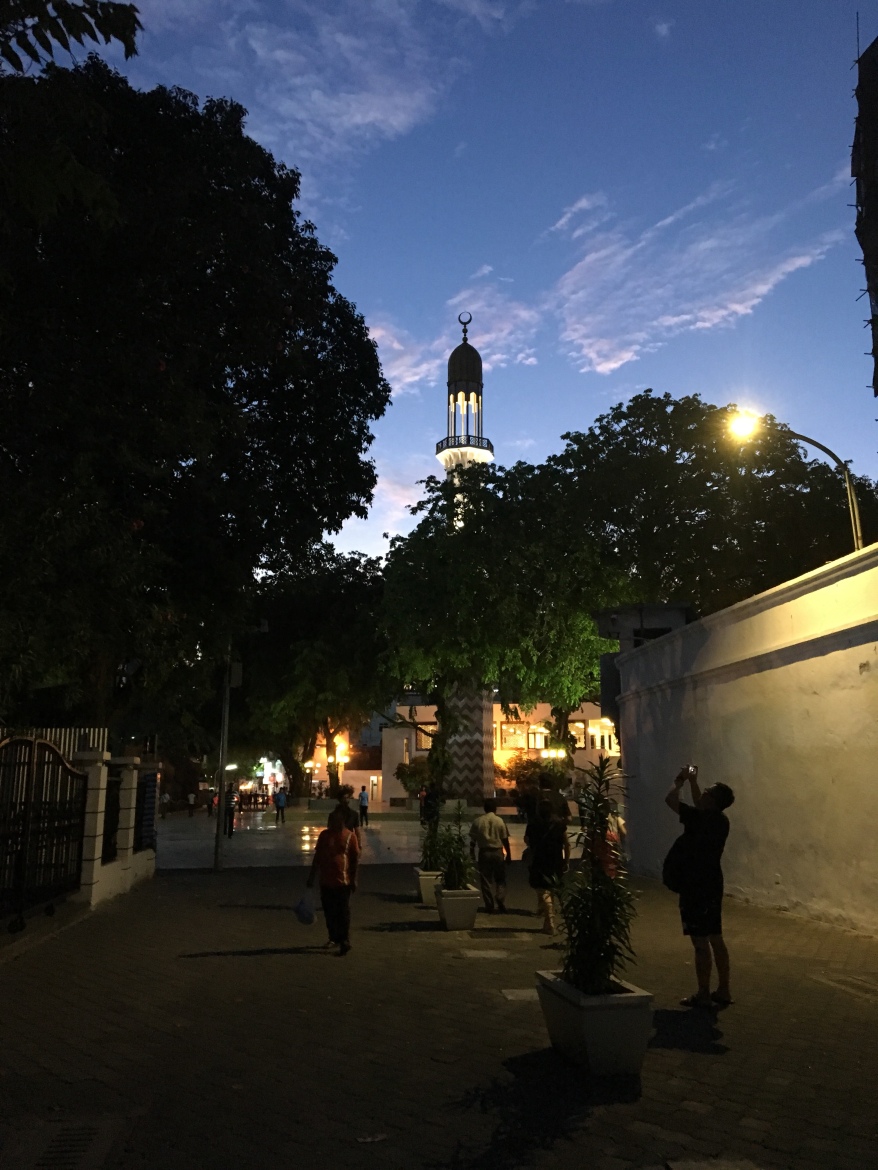 Avoiding long sit down meals where you have to order and wait for the food to be made will save a lot of time and allow you to explore for 2-3 more hours each day.