There are multiple ways to visit the Great Wall of China and at different price points. Full tours will charter a private vehicle. Some hostels charter group buses. There are also cheaper Chinese tour groups, but the guides only speak Chinese. These options may visit one or more of the three main Great Wall sites outside Beijing, although the Wall itself is quite expansive and you could technically visit any part of it on your own according to a library book I read a few years ago where an ex-pat working in Beijing decided to take frequent weekend trips with a rental car to all corners of the Great Wall.

One site felt sufficient. I opted for an even more cost effective route by taking the public bus. I chose to visit Mutianyu to avoid the larger crowds. Here are step-by-step directions:  https://www.travelchinaguide.com/china_great_wall/scene/beijing/mutianyu.htm

As I got on, I noticed a couple of foreigners with a Chinese man wearing a red armband. I didn’t know what the armband meant but it seemed official and he seemed helpful, so I got off at Dongzhimen with them, then he offered to take everyone to the Wall entrance in his van. At this point I realized we fell for his trap. He had lured us off the bus early at the wrong stop so we could not catch the connection. I tried to convince the others that we should all refuse and offer a low collective price because he was also stuck with us and needed to make as much money as he could. They didn’t understand, but luckily I lowered the price a little.

Keep your eyes off the ground when patrolling, soldier!

Once we arrived at the wall, I immediately went off on my own. After taking the “complementary” shuttle to the Wall base, I hiked up then visited a few towers so that I could come back down via a different path. As I hiked and crawled along the top of the wall, I couldn’t help but look at my feet the whole time because it was so steep. No wonder the wall wasn’t very effective at stopping invading Mongolians when all the soldiers were watching their step the whole time.

It turns out much of the wall was restored by the government and only a small fraction of the original was visible and connected to the new wall. I didn’t have time to venture too far out, but the contrast between the weather worn ancient wall was dramatic. 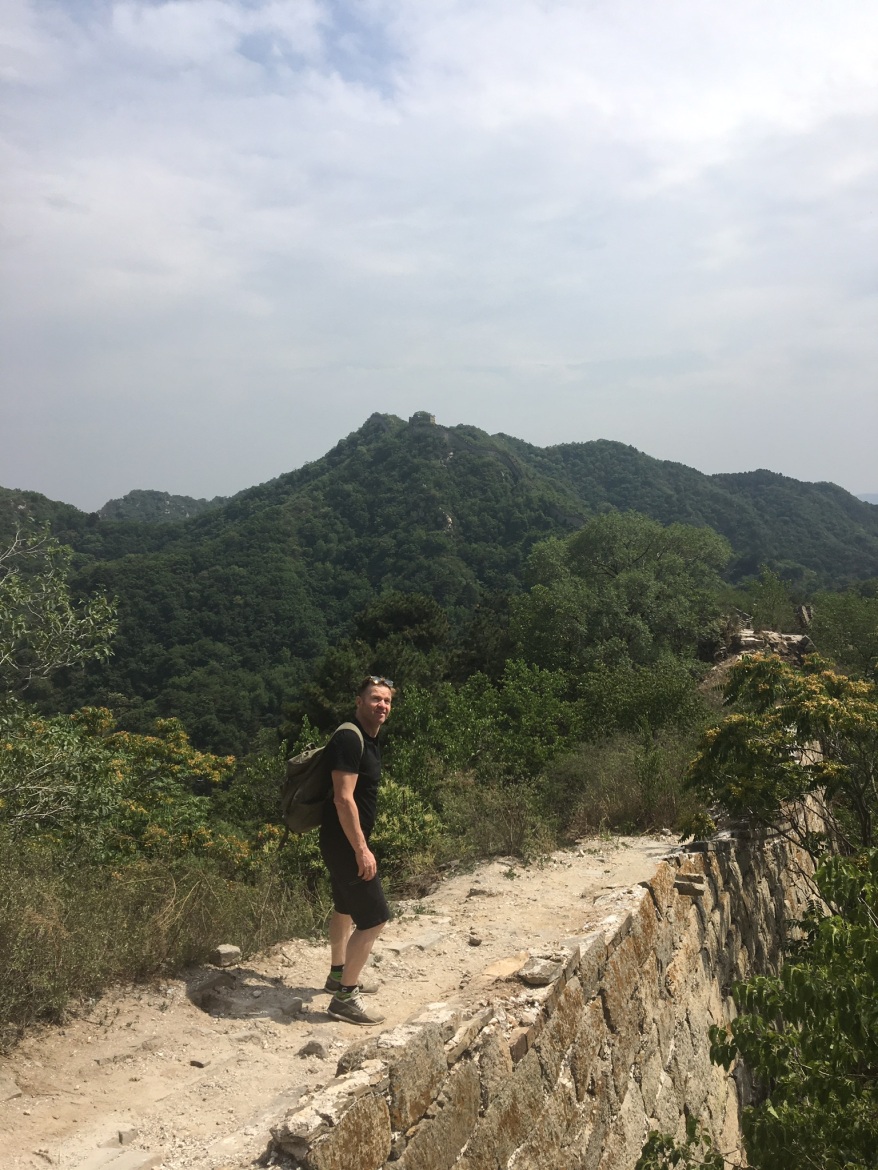 (not me) hiking the original Great Wall of China

Back at the main ticket office, I walked through the miniature museum, saw a few Buddha’s and asked for directions, then I headed off to the main road to catch the bus which I missed earlier.

With my bad luck continuing it’s streak, I got on the bus going the wrong direction and ended up going through a couple of small rural towns. Eventually the bus conductor (the person who collects fares if the bus driver doesn’t handle it) concluded that I was lost and told me to wait until we reached the end of the line. She made me pay for a second fare but I eventually made it back to Dongzhimen (the drop off was very far from where we boarded the van).

I transferred buses and as my bad luck would have it, it was commuter hour and I got on the slow, every stop, using city streets route. At least I saw some giant pandas on the way.

Tip:
When going the wrong direction on the bus, one way to estimate how much you’ll be delayed is to watch for the same bus number going back the other direction. Double the time and that’s roughly how long it’ll take for the next bus to arrive again at the spot. This method is less accurate for shorter routes.