I was told the carpool from Ulaanbataar to the Mongolia-China border, a 400 mile (650 km) drive, would only cost $20, a shockingly low price. However, given it only costs $2 to take the train, my observation that Mongolia felt like the country for the rest of Asia’s old polluting vehicles, and the low cost of labor, $20 didn’t feel unreasonable.

The driver was aggressive and shortly after departure, we had a minor car accident in heavy traffic. He waved off the other party and we continued on. As we sped through the Gobi desert, I could see dark skies and a sand storm brewing in the distance. The car was comfortable, but a little cramped with 4 passengers. I wasn’t able to communicate with any of them, but they were nice. We made plenty of pit stops for food and breaks.

Can you crash in the desert if it’s completely flat?

As we drove through the night, I kept track of the progress and the speedometer, calculating that we would arrive in the early morning, hours ahead of my expectation. I began to wonder where I could camp out to wait for the bus back to China, which I was expecting at 7am.

We arrived around 2am. I waited until everyone else was dropped off then tried to indicate that I wanted to be dropped off at the train station. The driver seemed uncomfortable, but pulled up to the parking lot by the station anyway. There was a noisy crowd loitering about, then another man who appeared to be the boss arrived and indicated that I could sleep in the car with the driver. So we made ourselves comfortable as best we could in the cold.

Once back on the China side, we were welcomed by dinosaurs and wind turbines, then stopped at Erenhot for a couple of hours, like before. However, on this return trip, we encountered a massive sand storm – not quite as large as ones I’ve experienced in Iraq, but enough to force the bus to a stop at times. 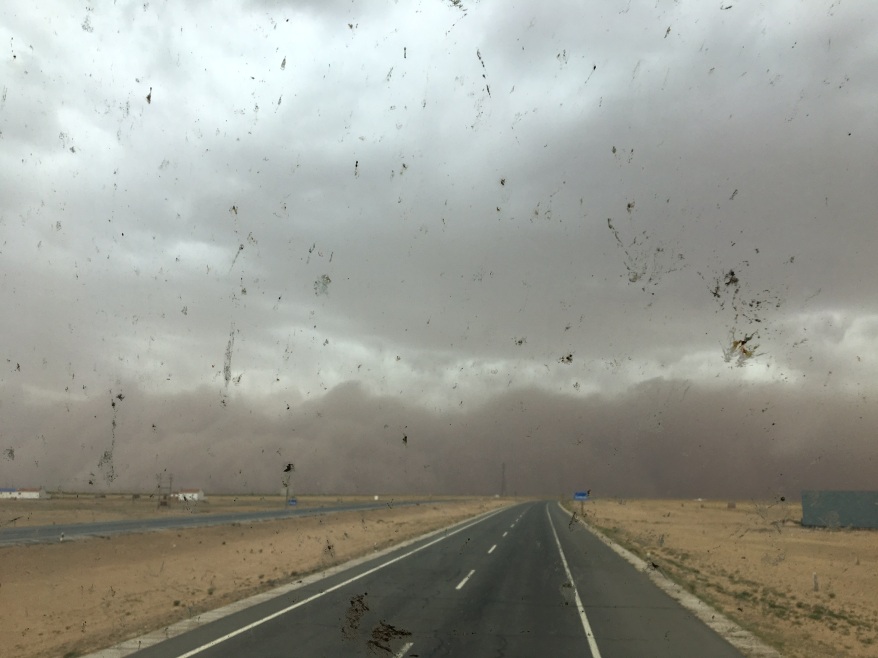 On the other side of the storm, we stopped at one of China’s “ghost cities” for dinner. I wandered around and even managed to explore a few buildings. It felt significantly less populated than Erenhot, but given the dispersed population of ethnic nomadic groups, I understood their goal of creating a commercial hub along the main road to connect Mongolia, Inner Mongolia, and the rest of China.

Tip:
I don’t recommend getting stuck in the desert during a sand storm, but if you do, then wear goggles to protect your eyes and cover your mouth and enjoy the unique experience. In the right conditions, a world can even turn red as if you’re on mars.