I woke to my neighbor nudging and pointing out the bus window. There were wind turbines as far as the eye could see. As I gained a little more alertness, I noticed a few green objects in the otherwise barren Gobi desert. They were dinosaurs! Lots of random dinosaurs! Then I fell back asleep because the bus driver messed up my sleep the night prior.

For some reason a few hours after we left Beijing, in the middle of nowhere within Inner Mongolia, the bus pulled over and the driver went to sleep. I expected him to drive all the way to the border first, but we were nowhere close. Then in the middle of the night he woke up and started driving. I was awaken by the commotion and thought he had reached the border while we were asleep. The process of checking the map woke me up… So I didn’t care enough to count all the dinosaurs.

Eventually we approach the border, but it was already a couple of hours after the borders opening. Then the bus parks in a random spot in Erenhot, the Chinese city closest to the border, and half the passengers disembarked. At this point I’m thoroughly confused, but my neighbor explained that they were giving us a few hours to go shopping (wtf!) and that they would pick us up later at another location (wtf!!). I’m freaking out, wondering how we’re suppose to know where to find the bus again, but luckily I had befriended my Mongolian neighbor so the other two foreigners and I were able to stick with him and his other Mongolian friends.

We passed by the Dinosaur Plaza, a park with life size Dinosaur models, as we followed them to a large bazaar style mall filled with vendors selling all sorts of items. I got a new tote bag. We lost track of half the Mongolian group, but they seemed to all know what they were doing despite lacking cellular service.

After looking around for a while and not seeing the rest of the group, they suggested waiting at a restaurant. With few options, we agreed. Surprisingly, the others were already there, so we joined them and ordered random dishes. I pointed to what looked like a noodle dish that somebody else ordered. When it arrived, it turned out to be a plate of meat with a sprinkling of vegetables! Not bad for $4 USD. I guess Mongolia has a large excess meat industry due to the nomadic herdsman lifestyle. We had to order rice separately. The hot goat milk tea, Suutei tsai, was delicious!

Meat with vegetables, not the other way around!

After lunch, we went to the bus pickup spot but it was nowhere in sight (wtf!!!), yet people calmly waited there. Then an identical looking bus pulls up and a load of passengers get off. I realize it’s not the same license plate. A couple of travelers were in the group, returning from Mongolia. We asked them for tips and suggestions then take them to the same street as the restaurant where an old man from our bus spotted us and welcomed us to join his table. They offer food and more milk tea (can’t refuse the tea!), and we ended up hanging out for a little while as he tried to communicate/practice his broken English.

Finally, it was time to go back to the bus stop, but the bus was still nowhere in sight. It eventually showed up, loaded up everyone and stashes of newly purchased luggage for import to Mongolia, then we headed to the border. 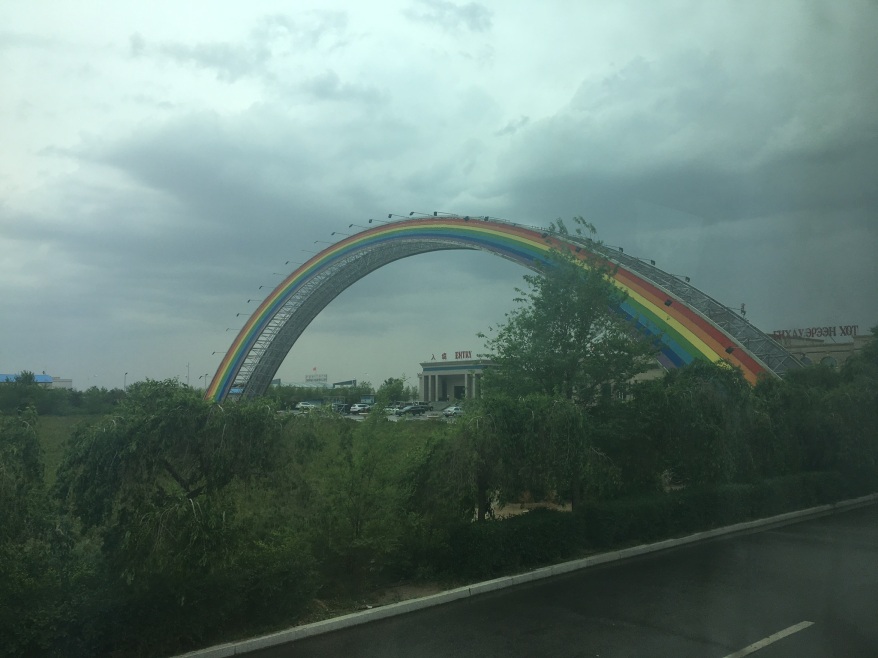 On the other side, the bus dropped us off at Zamyn Uud, essentially a small town built around a small train station. Our friends helped us buy train tickets, then jumped into a car and left. We explored the city a little, then boarded the train. Whereas the other two travelers chose $2 tickets, I opted for the upgraded $4 sleeper ticket and found myself by the old man from the restaurant. He was super nice and tried to tell all the other passengers about me. Some of them even offered me some rock hard teeth cracking candy – I thought it was a joke because I felt like a dog biting on a bone, but they showed me how to slowly gnaw on it.

I didn’t expect this long leg of the journey to be so interesting and fun.

Tip:
Stick with the locals because they know what to do. For example with this China-Mongolia border crossing, I read guides which said to hire a jeep taxi for the border crossing, but it seems that they just didn’t know about the later bus pickup time.