I was pretty tired from the late night pilgrimage, but I was actually adjusting my body by about an hour or two per day since arriving in Delhi, so that I could more easily accommodate a large time zone change.

Since my last two sets of tours started from the neighborhood directly north of the tourist center, I decided to walk around, but the neighborhood were all very quiet due to the Independence Day holiday. I saw one small gathering of people, but the streets were otherwise empty and messy. I found a small convenience store and got some of cheapest snacks I’ve ever seen on the entire trip. 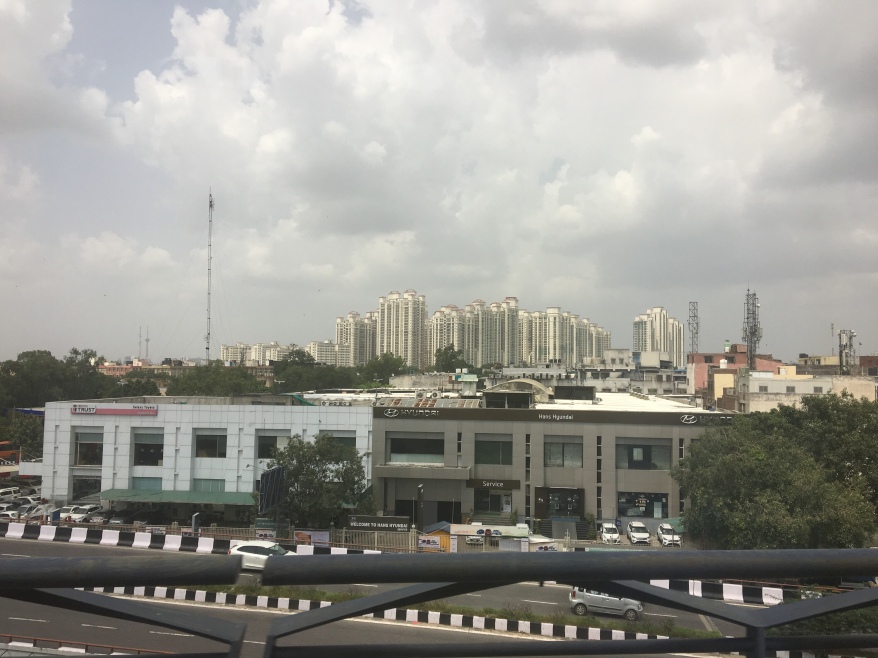 Then I made my way to the metro and rode it really far west so I could see a different part of the city. I got off at a point where the rail lines had diverged so that I was pretty far from the adjacent metro stop. It didn’t help that I walked toward a rail station, which I wasn’t able to reach because the road elevated into a bridge and there was no obvious and safe path down to the station.

Surprisingly, as I wandered the long stretches of road, I saw a blonde haired foreigner appear out of nowhere, but before I could catch up to ask for directions, she made it to her motorbike and drove off.

After a bit more walking, I found a bus and made it to a subway station. The metro was quite packed and very comfortable. Many people seemed to be loitering on the metro just for the air conditioning, which I thought was a good idea, so I stayed on and rode the system all the way to the eastern edge of the city, which seemed to contain newer residential and commercial developments. All along the route, I saw people out on rooftops flying kites, like in Sri Lanka.

Unfortunately, it took over an hour per way, and I didn’t want to miss the Independence Day festivities, so I went back to the city center and walked to India Gate where crowds were forming. There was loud music, kites, lots of Indian flags and families enjoying picnics as the weather started to cool down.

Before it got dark, I made my way back to the hostel to grab my bag and head to the Delhi train station to catch the direct subway to the airport, at times pushing through crowds as the streets were now packed with people. The airport express station was a little difficult to find because it’s located separate from the other rail systems, but the ride itself is pretty straightforward once you get on.

Despite the big holiday, there were still quite a few other travelers taking advantage of the cheaper airfare. I had no idea why the price was so low when I bought it back in Kathmandu, Nepal, but I was glad to be able to experience such a significant last day in India. One of my major objectives was to learn about India and see for myself its current state of development and future potential. What better symbolism than Independence Day.

When adjusting to a new timezone, you don’t need to change dramatically on the day of travel. It’s possible to gradually transition over a few days by shifting each day before and after by a couple of hours at a time so that you’re awake at the necessary part of the day in the new location.