As the overnight bus drove from Gujarat state into Rajasthan state, I was surprised to see more trees and vegetation, however the temples did not change as much. Perhaps it’s a testament to the reach of the Mughal empire through north India.

Once we arrived in Jaipur, it became hot and dry again. I carefully watched my map and waited for the perfect opportunity to hop off the bus and minimize my walk to the hostel. I had reached one of the three-city area known as the “Golden Triangle” where most tourist stick to on their India trips.

Thus, the staff were very surprised during checkin when I told them that I just got off a bus from Ahmedabad. They smiled and believed me once I offered to share a bag of crispy Gujarati Chakli snacks with them. I asked about laundry and was surprised by their immediate offer to take care of it for me.

After settling in, I headed out on foot through multiple city blocks of shops until I reached the Albert Hall museum. The ticket office explained all the tourist site prices (with foreigner price discrimination), which was really useful because I was able to calculate my best options. I opted to return in the evening to take advantage of the cheaper price.

So, I headed back to the market area, through Sanganeri Gate until I reached Hawa Mahal, an unbelievable wall of beautifully crafted windows and a huge fully accessible palace behind it. The windows’ small openings were to keep the women inside, while the large palace complex also kept them, me, and a couple of stray baboons lost and disorientated. But, from the top levels, you can get a phenomenal panorama of the entire city.

Once I found my way down, I continued to the City Palace and Pink City, an even larger complex of Mughal structures, complete with fully dressed Mughal guards. Though there seemed to be a lot of visitors near the entrance, once I got inside, it was so large that everyone spread out, so I was able to appreciate the grandeur by myself, like my visit to Bhutan’s Dzongs.

I wandered around until closing then took a sneak peak at a nearby temple as I made my way back to the Albert Hall museum. Almost all the exhibits were open, but with nicer lighting and very few visitors. The evening pricing was great because the low demand also lowered the price. 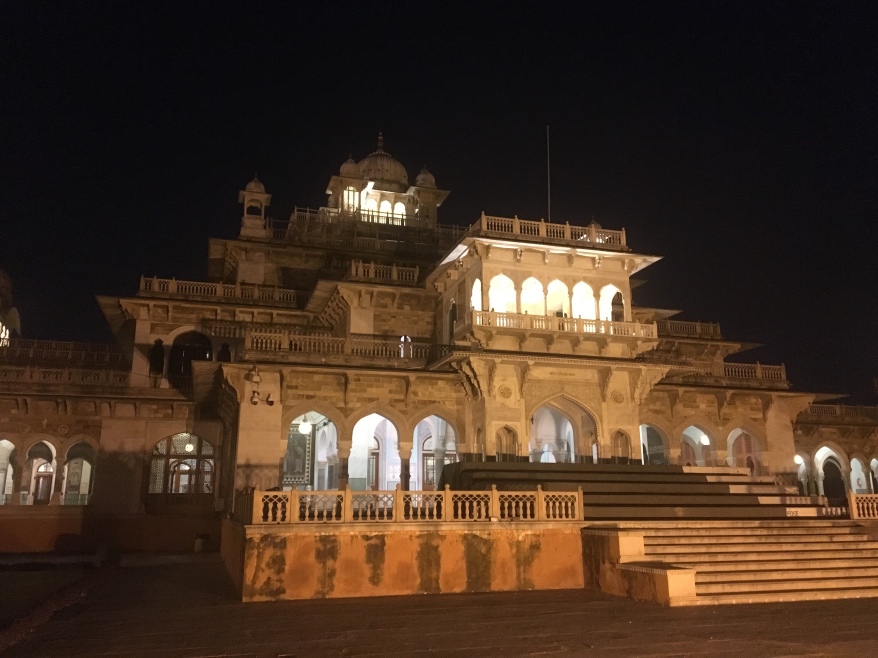 I wasn’t too concerned about being out at night because there were still lots of people on the streets and I was in the tourist zone. However, I decided to take an indirect route back to the hostel by exiting to the south, walking west along Central Park then cutting back to the main road in somewhat dimly lit streets.

Bring snacks from neighboring states or other cities and share with the hostel staff and other travelers. You’ll make quick friends and can trade food discoveries or other information.