Combining uncertainty with high hopes for my first walking tour in a while, and my first in India, I got up early and walked to Swaminarayan Mandir. Luckily, there was a sign near the entrance, and I was able to find the tour start point without getting lost inside the temple.

There was only one other tourist, an Indian student studying in Texas, who was home to visit family, which made it easier to translate and relate the concepts that the guide shared (mostly in English).

We walked through and learned about the temple, different neighborhoods, secret paths/traps, local traditions, British and Middle Eastern influence, etc. and since I was the only real foreign tourist, I got to ask tons of questions. 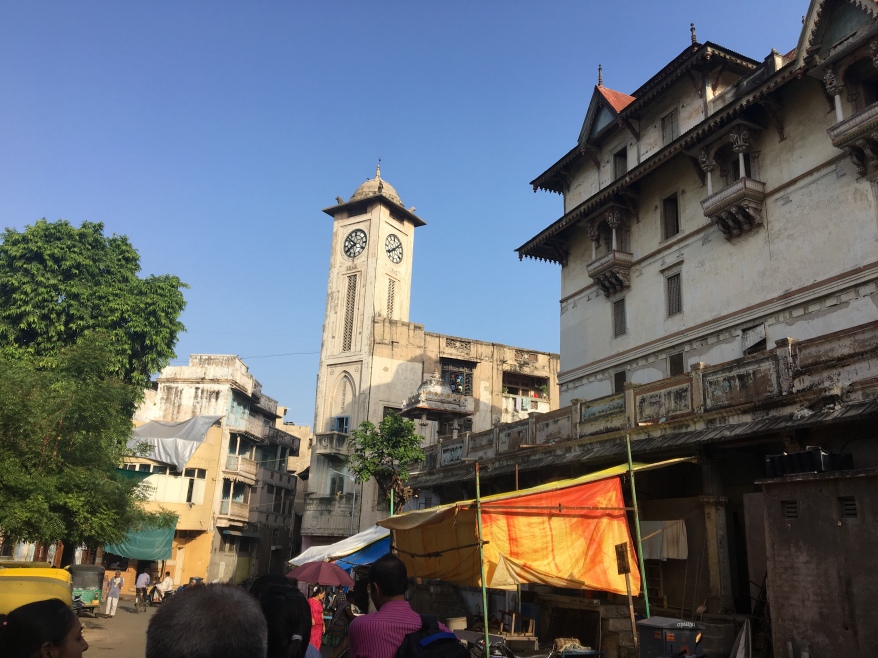 Finally, we reached Jama Masjid (mosque) right before prayer time, which allowed us enough time to walk around and examine the detailed masonry and carvings between the lines of columns, which held up the mosques’ large domes while protecting people during prayer.

Afterwards, I asked the other tourist to help me catch a tuktuk to Kankaria Lake, an artificial circular shaped lake which looked interesting on my map and she decided to join me. The lake was like Vastrapur Lake Park, hot and sunny without many trees except in the middle, but the center park was closed.

We walked around a little before she needed to meet a friend for lunch. I asked if she could ask the tuktuk to drop me off near Raipur gate along the way to her lunch, which saved me a lot of time. 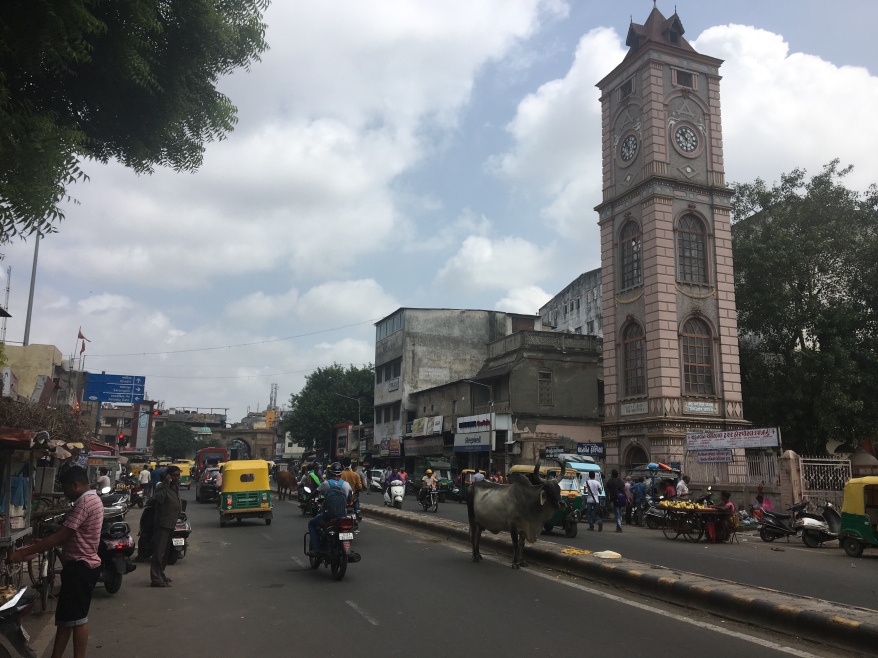 From Raipur gate, I was able to reach the Jhulta Minara next to Ahmedabad rail station. The minaret pair, which were described by the tour guide are an interesting phenomenon of perfectly balanced pillars which shake when one is effected, but the mechanism by which they transmit energy from one to the other is a mystery. 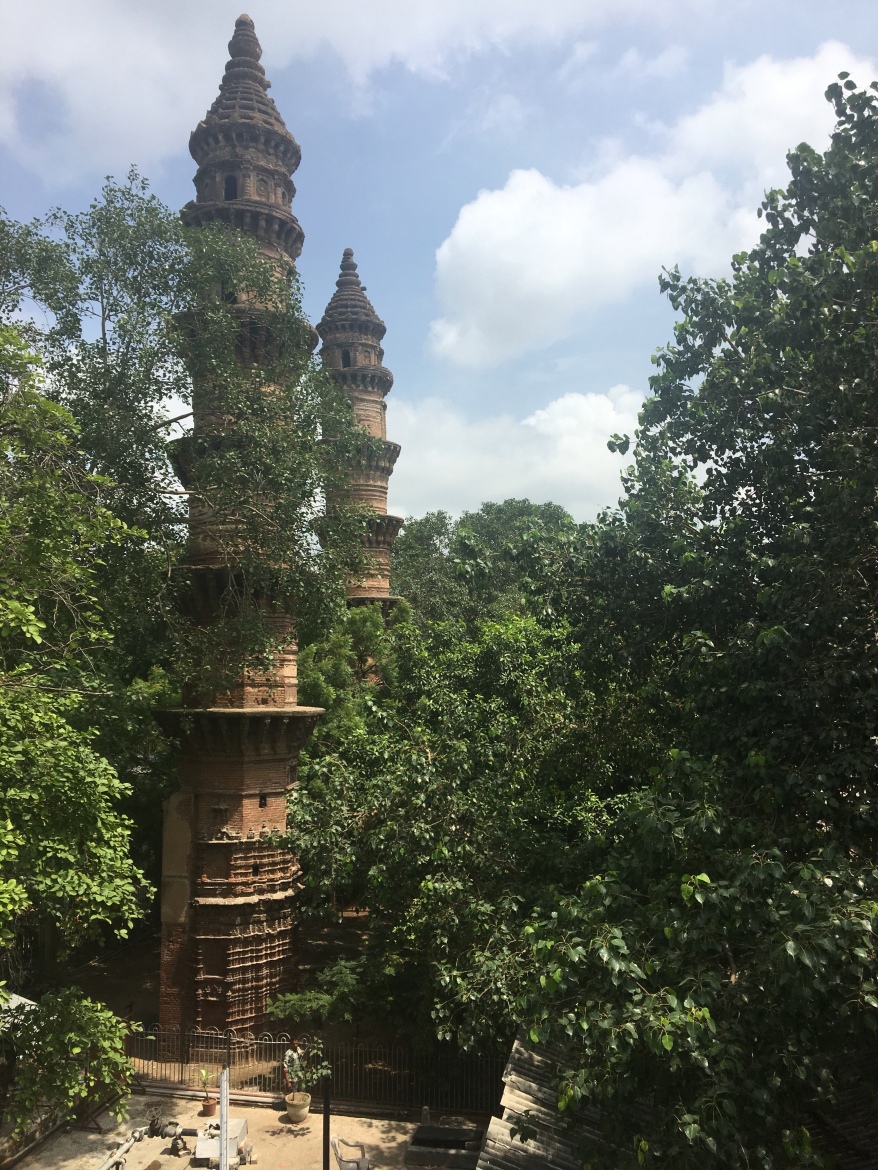 After crossing to the other side of the railway, I headed north to the Dada Harir Stepwell, which took me through a few neighborhoods, until I reached what looked like a fenced off open plot of land. However, once I reached the entrance, which is completely open to all, including a couple of people were loitering around. One person who I later realize was the tour guide/driver for a married tourist couple came up to me and directed me to walk in. 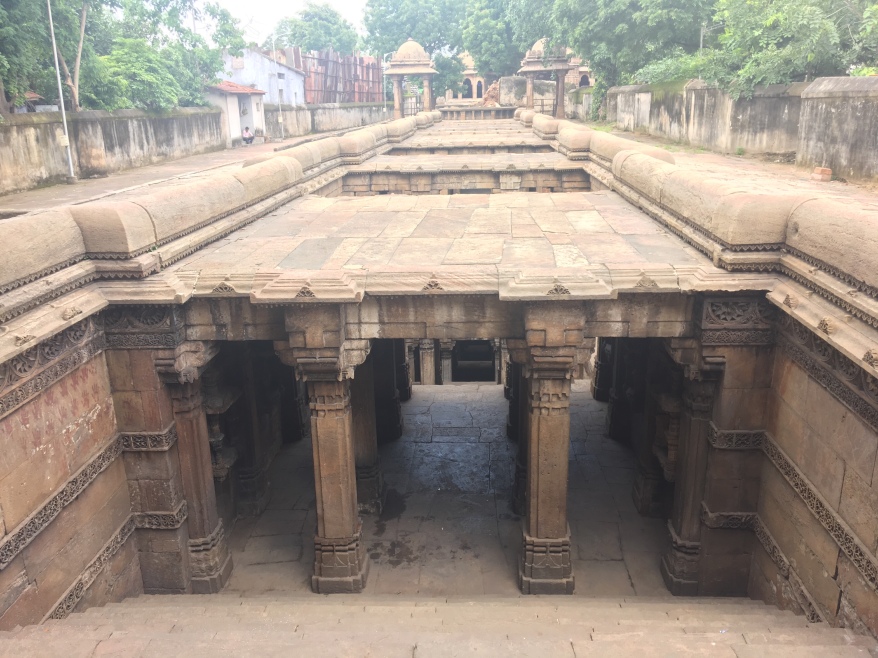 I was absolutely blown away by the architectural complexity and beauty of the step well and how well preserved it looked. I couldn’t understand why there was nobody around. Walking down just one level, I felt significantly cooler. The base was paradise amidst the scorching arid summer heat.

In addition to the step well was a small mosque and tomb. I spotted the Imam showing the other tourists around the roof and waited patiently as I took a bunch of pictures of a squirrel with the mosque as background. When it came my turn, the Imam also walked me up to the roof, prayer floor and a separate tomb where he asked for a donation. I felt a bit conflicted because I wasn’t sure if he was really an Imam anymore, but I donated in appreciation of his effort.

When I left the mosque, I followed the road west and ran into the beginning of a march forming. Even the cows appeared to make way for the large group. They were going the direction I needed to go, but luckily due to the group’s size, I was able to walk ahead of them and keep a good distance. However, as we reached an overpass, I saw a smaller group of marchers coming from the other direction, so I decided I should head south toward the city center and not risk having my return route blocked.

I still had a lot of time, so I headed to the bus station and caught a bus going toward Sanskar Kendra museum, an unusually large museum which felt very under utilized. Across the street was the National Institute of Design, a small college where I came across a nice diverse food menu and took a break.

Crossing back to the city center, I explored the nearby markets, Victoria park, Children’s Traffic Park (really?), and Bhadra Fort. Besides the masses of people, I also noticed there were endless swarms of flies, and I realized they were coming from pools of water that collected in areas like Victoria park and puddles along the road, though I wasn’t sure where the water came from. The flies reminded me of Perth, Australia from month two of the adventure.

As evening approached, I returned to the hotel to grab my bag and asked the staff to help me get to the bus pickup point, which was nearby where I first encountered the marchers. There were still marcher around, so I was glad that I avoided problems and was able to catch the overnight bus to Jaipur.

If you see large groups of people walking around shouting slogans and holding large banners, it’s probably a protest. Don’t assume it’s a festival and don’t get near it or you might end up getting dragged into something you don’t want to be a part of, or possibly miss critical travel plans.