Coming from California, I recognized Hyderabad as a popular city for American companies to outsource technical work like software development, IT, and finance. But I didn’t realize the degree of pride associated with those sectors until I saw government signage that referenced “Cyberabad.”

With my day of experience riding the buses up and down Hyderabad, I set out to find the tech hub, which was located far to the west of the city. I planned to get off at HiTech city, but noticed more modern buildings and some tech company logos in the distance so I stayed on the bus.

The famous American and Indian brands felt familiar, yet distant. As I walked by the buildings, I also recognized other American eateries, perhaps placed to create a western atmosphere. 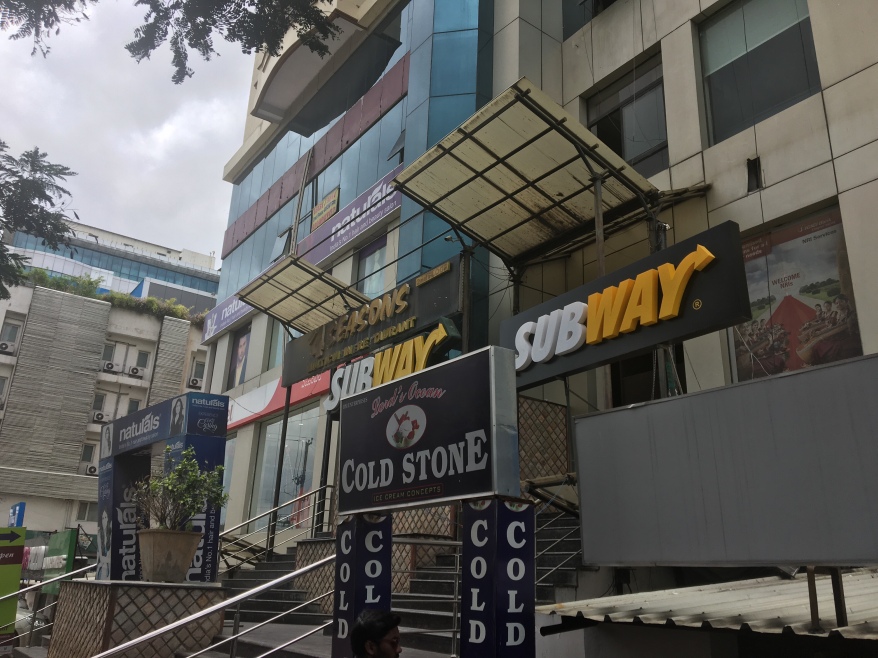 To my surprise I saw a foreigner walking around and decided to strike up a conversation with her. She was attending a conference, but didn’t sound too pleased given the way she described how the big Indian companies operate.

Afterwards, I headed toward a nearby block of high rise buildings to get a sense for how some of the tech workers lived, but I found myself walking through a vast expanse of land inhabited by lots of bulls. It was a bit intimidating as I didn’t know cow etiquette nor how much distance to keep away from them, but I assumed that I would be safe if I stayed on the dirt path. 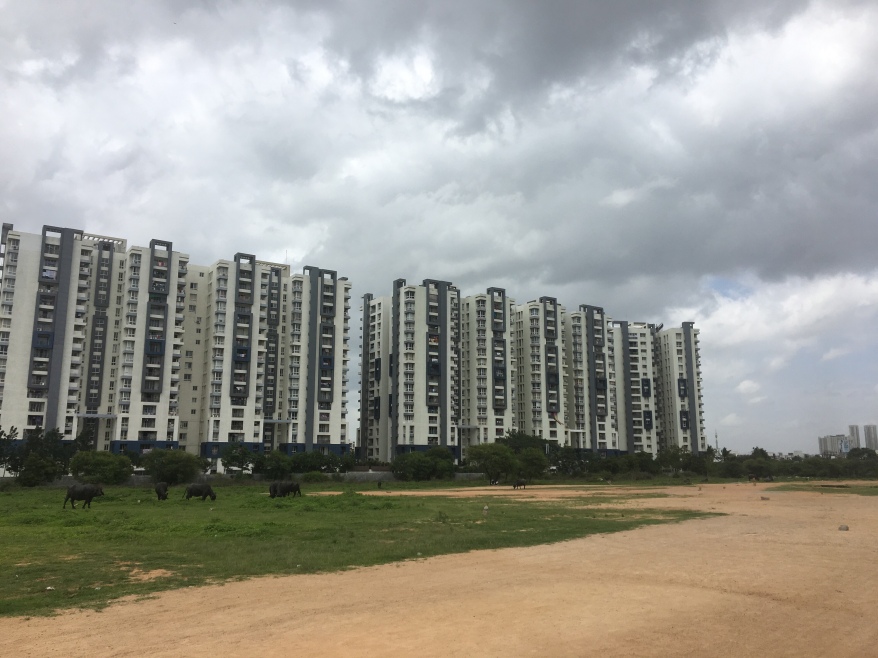 The cows deterred me from reaching the apartment blocks, but I did find myself going through a normal residential neighborhood and a less developed one before finally reaching a main road, which allowed me to head back to HiTech city.

Along the way, I stopped by Shilparamam Crafts Village, a large park containing numerous reconstructions of ancient and traditional ways of life. It was quite a contrast compared to earlier. Even a cute set of stray puppies were harmless compared to the bulls. 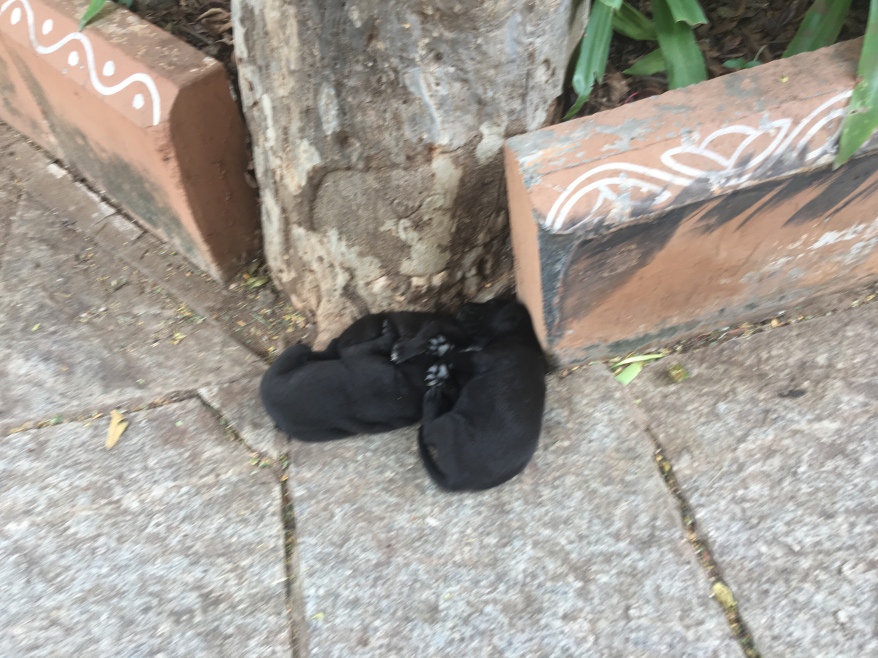 After getting a little lost inside, I made it out, passed by Cyber Towers and a couple of unfinished/abandoned office buildings then continued south to Mindspace Park, the city’s primary technology center. The concentration of glass office buildings and really well maintained gardens felt surreal. 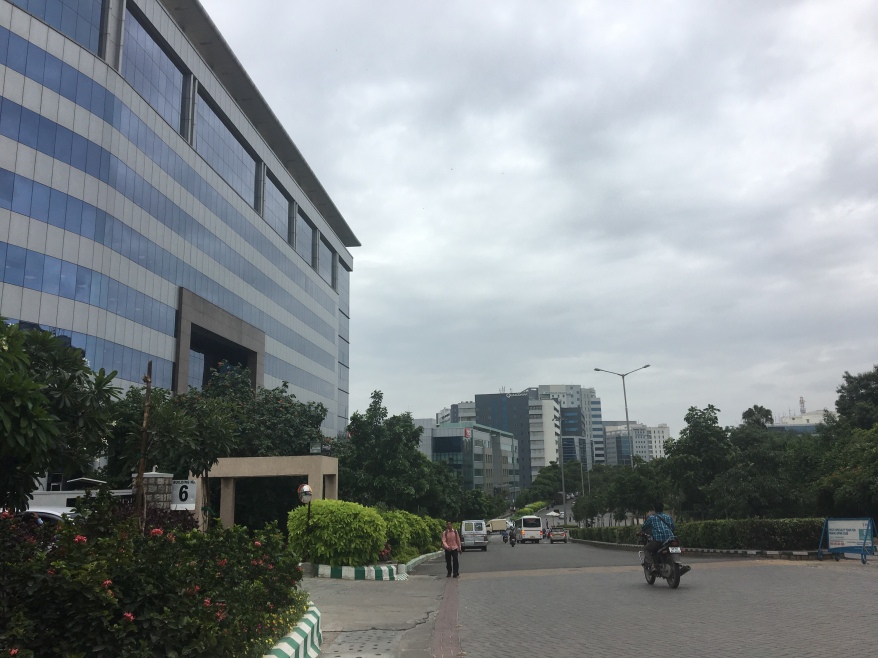 I knew I wouldn’t be able to enter any of the buildings, but there were plenty of workers out and about, which gave me a sense for office life. I sensed that there shouldn’t have been so many people taking smoke breaks, and that very few women worked in the sector. I also counted only one woman wearing modern office clothing. But, hopefully some of those rules will change over time since the people there didn’t seem to care as much for rules, nor I for that matter as I took a picture of a “photography prohibited” sign to show a person parking next to a “no parking” sign.

I also got a little lost inside Mindspace Park because there are only a few entry points and I wasn’t able to cut through any buildings to get back on the main road. The gates served as an interesting barrier between street food vendors on one side and workers on the other.

From the gate, I headed further south to check out InOrbit mall, which looked like the local hang out area and a place where I could find a compatible ATM to withdraw money. There was also a Hypercity where I bought some fresh fruits and a spot with a nice view of a nearby college campus.

As evening approached I walked back to the main road to catch the bus back. I found myself crammed with a bunch of commuters, one of whom informed me about the gender segregation norms, but I didn’t find it necessary to honor an unlawful rule. However, the mounting pressure I got from the passengers prompted me to get off a little early at GVK One, another luxury mall.

I watched a movie (I wanted to see if India and Bangladesh shared the same patriotic pre-movie flag salute – they do) then headed home.

You should definitely follow a country’s laws as best you can. The beauty of travel is that it opens your eyes and ideology to different perspectives and ways which people and societies govern themselves. But just as you can learn from others, you can also share your values with them. You can stand up for your own rights and if things go very bad, your government will likely come to your defense.