I asked the space hotel’s staff about bus routes to Gonbie station and was able to cut some time off the trek to the Zhuhai-Macau border crossing.

After the crossing, instead of going southwest, I turned east and made my way to the Communications Museum on the eastern shore. It was mainly a children’s education museum, but the path there allowed me to see and experience a little of daily life in Macau.

I was also close to Guia Hill, a combination park, underground fortress, and garden where you can get a panoramic view of the old city. For a small fee, you can ride the cablecar up to the top then take a short walk to a tunnel entrance and get a free hourly tour of the tunnel system.

After slowly making my way down, I stopped by a couple more nearby museums, the Polytechnic Institute of Macau, Golden Lotus Square, and Fishermen’s Warf.

Then I began the casino portion of the day. From South Plaza, I walked to the Macau Outer Harbour Ferry Terminal where I caught a free shuttle to the south island’s casinos. 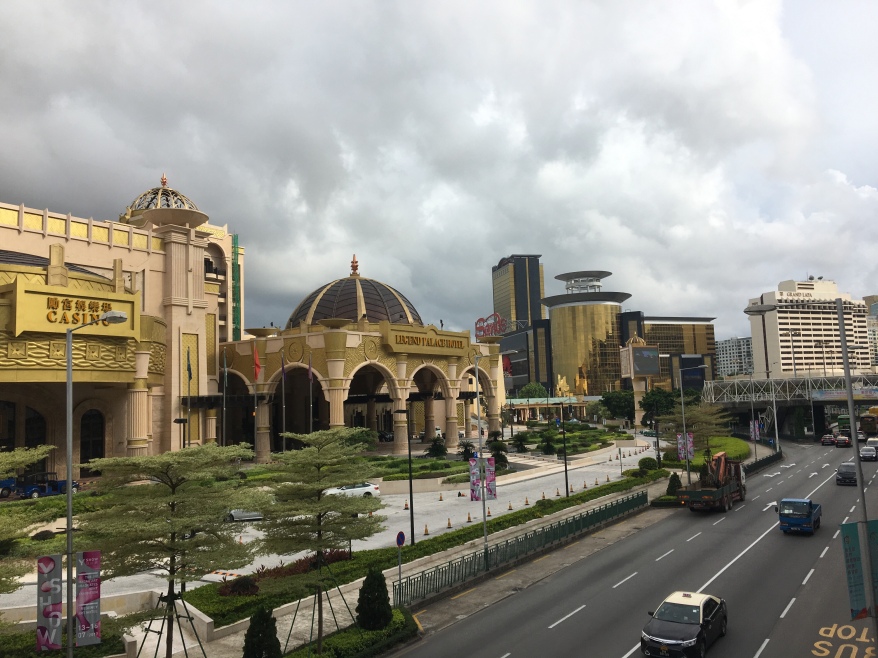 Lots of Macau South Island was reclaimed and dedicated to massive casinos rivaling those of Las Vegas. I got off on the furthest casino, Studio City, then slowly made my way through each casino, avoiding the gambling floors and money traps. However, I did watch a Batman 3D ride since it’s hard to find a similar fully interactive experience like that anywhere else.

Many of the casinos felt like exact replicas of their Las Vegas counterparts, including the Eiffel Tower and Venice canal boat ride. About the only thing that was unique were the restaurants and featured star chefs.

Even though I knew what to expect from the casinos, I still entered all of them until I reached City of Dreams, where I knew I could catch a free shuttle back to Gonbie station in the North Island alongside many workers and hotel staff that lived and commuted daily from the cheaper Zhuhai side.

I returned early so that I could also explore a little of Zhuhai. I walked north through Yingbin South Road, a busy commercial center, but then it suddenly started pouring rain and I was forced to head back to the hotel without making it to Guangdong Greenway, also known as lovers road, a scenic seaside walking path.

Hotels and transport hubs near casino zones always offer free transportation. You can save on transportation costs by planning your routes ahead of time. Sometimes, airport transport to hotels can also save you money if they drop you off near your hostel.