Vientiane, aka Viang Chang, is the capital of Laos (pronounced “Lao” with a silence “s”), and a rapidly developing city that, much like Myanmar (aka Burma), recently opened up to the world. The transition left a patchwork of ancient and modern buildings throughout the city.

Immediately stepping out of the hotel, I was faced with That Dam, an ancient stupa serving as a roundabout. It’s unkempt beauty was both sad and endearing.

One block over is Lane Xang Avenue, the main street cross-sectioning the city with sights, attractions and everything else all along it’s route. I walked through a few shopping centers then came across the tourist information office which contained English speaking staff and a mini museum describing Lao’s many cultures and ethnic groups.

Further north was a huge square housing Patuxai, a memorial from the Laos-French war for independence. Interestingly, the material was donated by America to be used for an airport. 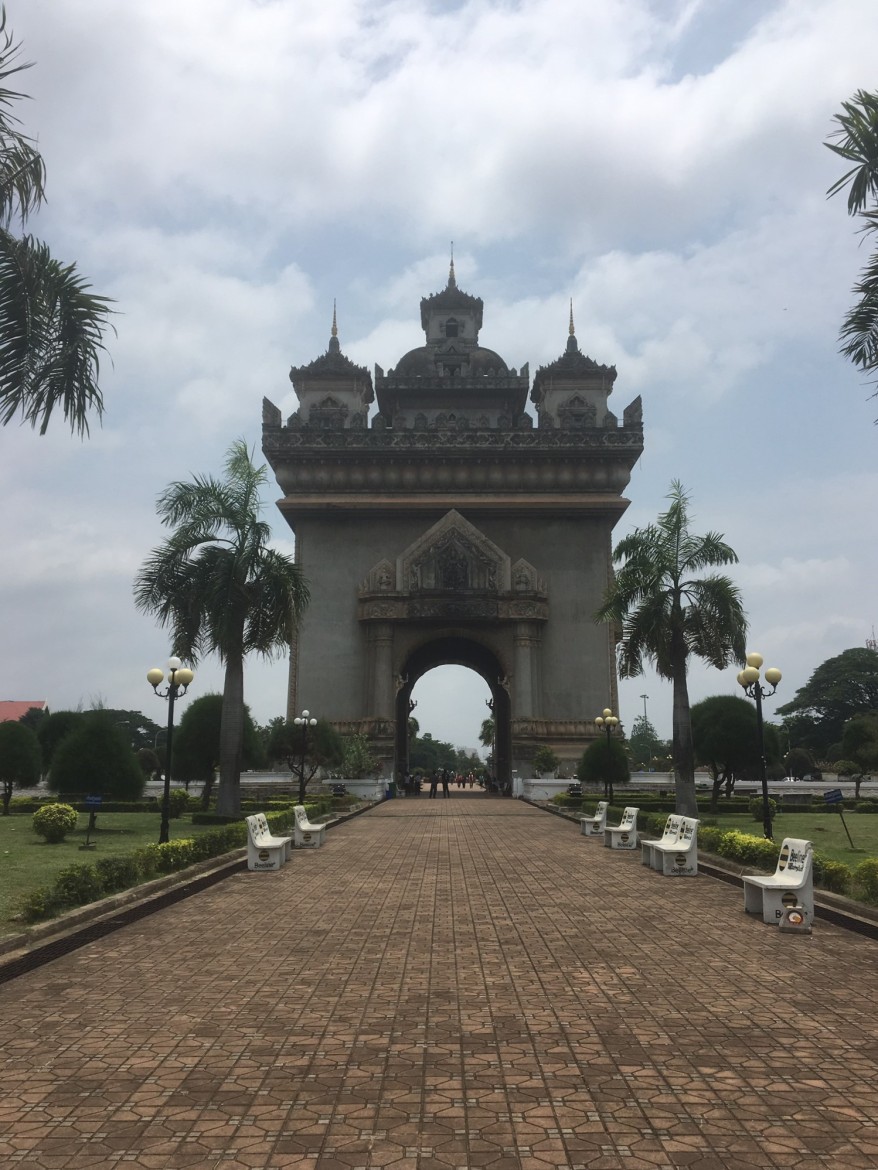 Walking under the structure, I discovered a free stairway leading to shops on the top levels selling all sorts of potential artifacts and ancient treasures (warning: it’s illegal to knowingly purchase artifacts), as well as rusted ammunition from wars. I was there just for the view.

Vientiane from atop Patuxai. Laos

Next, I detoured from the main street to Pha That Luang then cut back toward the Revolution monument, interacted with some local office workers who helped me buy some fresh coconut water. Then I visited the People’s Security Museum, a large four story modern modern structure detailing the activities of the Laos communist party and it’s security forces division in maintaining social order. Across the street was a similar, but smaller museum dedicated to President Souphanouvong’s life.

Given the simplicity of following one road, I kept going to Kaysone Museum despite the long walk, but the guard refused my entry because they wanted to close early due to insufficient tourists. Shortly after it began to rain, so I ducked under a bus shelter and eventually caught a bus to the National University of Laos.

I wandered around the campus, watched students compete in a basketball tournament, then explored the small market street in nearby Dongdok village outside the school, before heading back to campus where I met a professor and chatted with him for a little while. I noticed he was afraid to speak ill of the government. He directed me to the bus stop and I made it all the way back to the Mekong riverfront just in time for the start of the night market in Chao Anouvong Park.

It was a lively night with endless shops and vendors. Eventually, I noticed a few other tourists, then stumbled upon the tourist street, nowhere near where I was staying. Along the Mekong Shore Boardwalk, I also encountered a young tourist performing spray paint art and wondered if he ran out of money in Laos.

Don’t run out of money when traveling… Vientiane, Laos.