Bandung is Indonesia’s third largest city, known for it’s role in establishing the first modern Asia-Africa relations. The era of transition to modernization could be felt at my first stop, the Siliwangi Museum, which celebrated Indonesia’s most decorated military unit. The small base had a building dedicated to exhibits, one of which briefly touched on the valor of the Timor Leste campaign, providing perspective against the Timor Leste side of the story. A brief walk west lead to the Braga City Walk mall with many modern amenities. I sought an exit where I could see the Sungai Kikapundung river on the other side of Jalan Braga, but found an un-mapped bridge which revealed the cramped and under developed side of the city as well as the local Pasar Cikapundung market, literally behind the facade of modern buildings and malls. As I emerged back on Jalan Braga, I stumbled upon a German tourist group and followed them a little to talk to the guide, pointing out how they have no idea what lies one block over – the guide agreed.

South on Jalan Braga is the Asia-Afrika Konferensi Museum which emphasized the role of newly unified Indonesia (via military force) in establishing the “second world” countries, a block of neutral nations during the Cold War between the USA and Russia, and pushed an agenda for post-colonialism independence movements. I snapped a picture of a group of school children posing in front of the conference hall beside the Asian-African Peace Gong. Afterwards, I crossed the bridge and watched daily life at the Taman Alun-Alun park, a popular hangout for locals with entertainers dressed up as popular characters like Pikachu, in the hot scorching sun.

It was so hot, the wearer melted away. Hollywood aka Bandung, Indonesia.

I had heard about a “jean street” and looked around some of the mall complexes around Alun-Alun but couldn’t find it, so I continued south to Gereja Santo Paulus an unusually located Protestant church, then to Bandung Lautan Api, a huge and strangely deserted park.

As the weather began to deteriorate, I hopped on the buses to Gedung Sate an architecturally impressive open public building with mini museum and closed roof top access, but I got lucky because some police officers were getting an unauthorized tour so I walked up with them like I didn’t know what was happening.

Next, I headed to Bandung Institute of Technology (IBT) and marveled at the modernized traditional Indonesian architectural style while wandering through much of the compact campus, enjoying an art exhibition and relaxed at the open air balcony study areas. 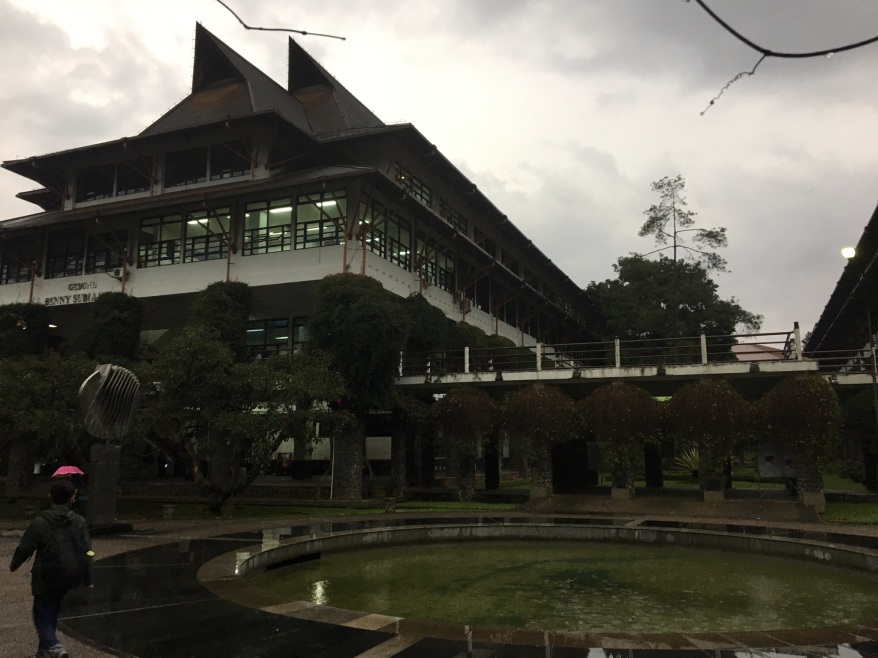 A short walk away is Ci-Walk (Cihampelas), a long mall strip raised above street level to avoid car traffic, but there were other malls on ground level, making for an extremely traffic congested area.

Tip:
When referencing locations, avoid using acronyms even if other passengers and the driver use them because accents can skew the sounds of letters. As an example, my first attempt to visit IBT (Bandung Institute of Technology) was actually to IBC, but whenever I said “IBT”, they heard me saying “IBC” and confirmed the route.