Brunei to Malaysia by air or land?

I had a suspicion my flight to Kuala Lumpur booked through a third party travel site did not properly process, and it was confirmed when I tried to check in the evening before, leaving me scrambling to figure out a backup plan because I refused to pay triple the original booking price. Coincidentally, one of the other guests also stayed up late frantically trying to book a separate flight to get to Mulu in inner Borneo to explore some caves in the middle of these relatively undeveloped forests, but she had a credit card problem. As she described her route, which required her to first take the bus to Miri, Malaysia, I saw another pricing inefficiency and realized that it would be even cheaper to take the bus there and see a little of East Malaysia to diversify my perspective on the country. I offered to pay for her flight and thus committing her to repay me once she was able to withdraw money in Malaysia, which she did before we parted ways. I got only a few hours of sleep before we headed to the bus stop, where we traveled parallel the Brunei coast, seeing the oil and gas infrastructure which funneled some 90% of the country’s wealth to the royal family (and skewing GDP per capita numbers). These new discoveries made up for a sushi brunch meeting which I had to miss.

Tip:
Call your credit cards and other financial institutions in advance to let them know all the country’s which you’ll be traveling otherwise you may not be able to withdraw money or make ticket purchases if you’re logging in from a foreign IP address – even if the country is right next door. Some companies have more sophisticated systems that know you’re traveling based on things like airline purchases, but it’s always safest to call the company in advance. 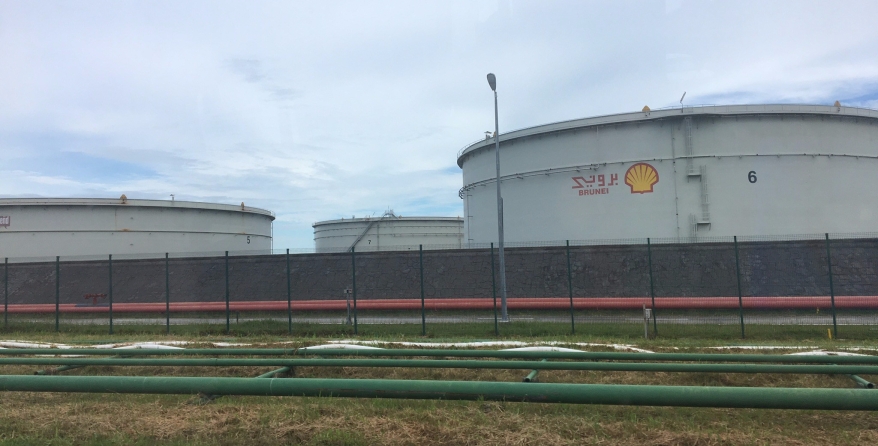 Oil and gas drilling have large scale operations throughout the South East Asian and Pacific region.