The free ticket to explore Kunming for a day was awesome and at the ticket price I wouldn’t have felt bad about staying longer, but the ultimately destination was Beijing to meet a friend. I arrived a day early so I needed to plan carefully which sights to see as to not repeat anything with her.

I started off right at the heart of Beijing near Qianmen Historic Street where my hostel/hotel was located. The street was spacious, leading up to the Archery Tower at South Gate, but instead of going to Tiananmen Square, I turned right and wandered down whole city blocks of historic styled reconstructed houses and streets such as Caochang Bataio Alley, then I looped back and visited the Beijing Planning Exhibition Hall (museum) and Railway Museum so I could get a sense for the city’s overall layout and history. I was impressed by the advanced audio-visual technologies used to tell the Beijing story, including large scale models of the city and fly through cinematics.

Finally, I crossed Tiananmen Square, all the way to the Forbidden City Entrance to get a sneak preview of the site, but I turned right again and freely strolled along the path outside the walls. 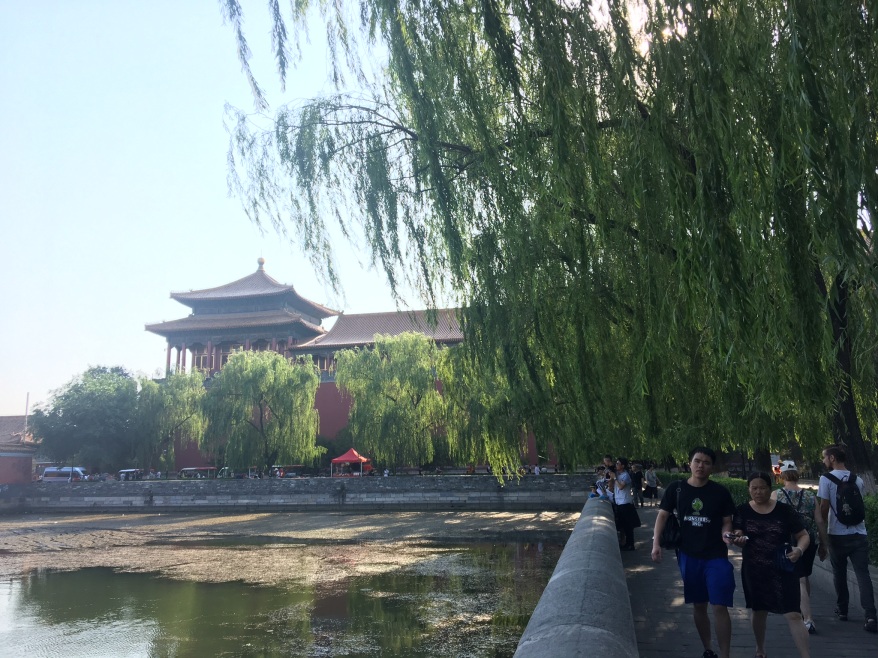 I crossed the bridge on the East Gate, stopped by Pudu Temple, then Wanfujing Shopping Street, a long stretch of shops and malls that got progressively more modern and luxurious as you approach Wangfujing subway station.

After wandered through Beijing Mall, exiting the other side, I continued west to Leifeng Memorial Museum then the Imperial Ancestral Temple, a huge park, separate from the Forbidden Palace, but containing just as interesting and grandiose structures. It only cost 2 RMB ($0.30) to enter and closed much later than many other places. The sun set and flocks of birds flew over the palace’s open courtyard – yet there was only one other person in sight to enjoy the serene experience.

The park did eventually close, so I crossed next door to Zhongshan Garden which was an open space with no entry fees but just as many interesting sights such as the Alter of Earth and Harvests and a huge spherically shaped theater with a half starry night designed dome, perfectly fitting as night approached and I made my way back to the hostel/hotel.

Tip:
Get a general sense for operating hours of various sites so you can plan an efficient path. Often you won’t know the hours until you get there. I carefully re-evaluate the map with each new piece of information and adjust my route so I can loop back at the latest possible time, assuming it makes sense to do so. This is easier to do when you have a dense concentration of attractions.